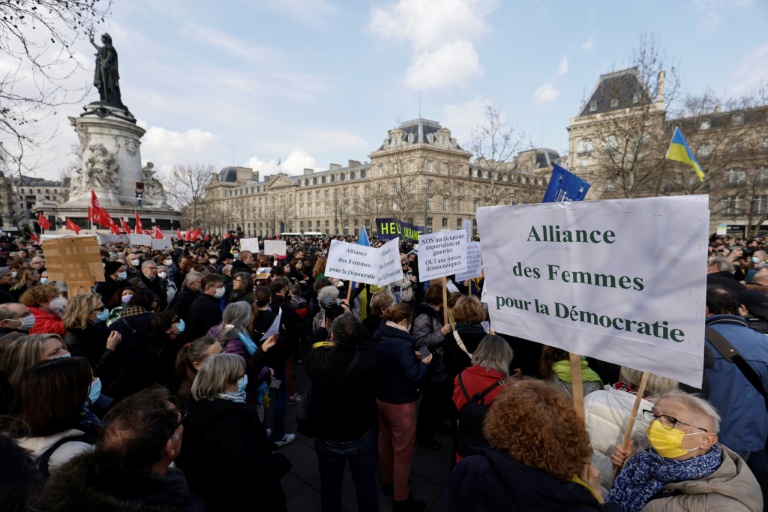 Tens of thousands demonstrated in European cities on Saturday to support Ukraine and demand an end to the Russian invasion.

Citizens around the world have been horrified by Russian President Vladimir Putin’s attack, which began on February 24 and appears to be entering a new phase with escalating shelling.

Several thousand people gathered in Paris on Saturday afternoon to say “no to war in Europe”, said an AFP correspondent.

“We will be here every weekend, in Paris or elsewhere, until Putin leaves, withdraws his tanks,” said Aline Le Bail-Kremer, a member of Stand With Ukraine, one of the groups that organized the demonstration.

“Despite the suffering, we will overcome,” said Nataliya, a Franco-Ukrainian woman who did not wish to give her surname to protect her son who is in Ukraine.

Some 25,000 protesters were expected at rallies in more than 100 cities in France, a French police source said.

One of the largest rallies to demand the withdrawal of Russian troops from Ukraine on the 10th day of the invasion took place in Zurich, where organizers believed 40,000 people attended., Swiss news agency ATS reported.

Demonstrators in Switzerland’s biggest city called for “peace now”, while others carried signs saying: “Stop the war” and “Peace”.

Hundreds of people also traveled to London, including Ukrainians whose families were forced to flee Russian bombs.

“We must continue to remind everyone, we must remain united in support of our country,” Olena Marcyniuk, 36, said at a protest in Trafalgar Square, central London, with her 14-year-old children. months and nine years.

“Maybe somehow (we can) make Russia realize that the world is for Ukraine and they have to start acting to stop the war.”

She said much of her family had fled but her uncle remained in Kyiv to “fight for the city”.

In the center of Rome, trade unions and organizations gathered in a large “peace procession”, demonstrating against Putin but also against NATO.

“No base, no soldier, Italy out of NATO”, chanted pacifists preceded by a large flag in the colors of the rainbow.

“This is perhaps one of the first real demonstrations for peace,” Italian cartoonist, actor and writer Vauro Senesi told AFP.

“Here, nobody believes that we make peace with arms, that we make it by sending arms to one of the parties (Ukraine).”

More than a thousand people also demonstrated in the Croatian capital Zagreb with banners saying: “Stop the war, save Europe” and “Glory to Ukraine”.

In the Balkans, the invasion has rekindled dark memories of the bloody breakup of Yugoslavia in the 1990s, which claimed more than 100,000 lives in a series of conflicts.

Last weekend, hundreds of thousands of people also turned out in yellow and blue across Europe, including Russia, Germany, Spain and the Czech Republic.