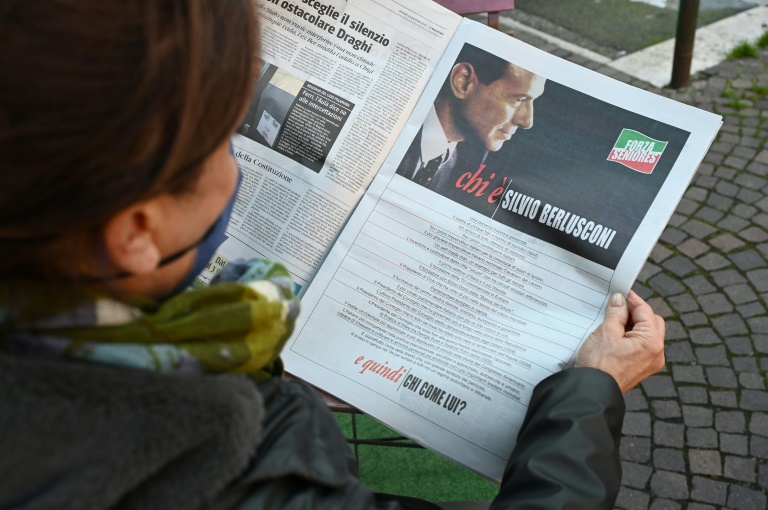 Italy’s parliament begins voting for a new president on Monday, with Prime Minister Mario Draghi tipped for election in a high-stakes version of musical chairs that threatens the government’s survival.

As behind-the-scenes negotiations came to a head this week, the most brash campaigner was billionaire Silvio Berlusconi, whose charm offensive included bragging about his steamy “bunga bunga” parties.

The 85-year-old former prime minister has long coveted Italy’s top job, even promising his late mother he would get it, though few believe he has the necessary votes.

It is notoriously difficult to predict who will win the secret ballot for the seven-year post.

Although a largely ceremonial role, the president wields considerable power in times of political crisis, from dissolving parliament to selecting new prime ministers and denying tenure to fragile coalitions.

Italy needs a stabilizing figurehead more than ever: the disparate power-sharing parties in Draghi’s government are already in battle mode ahead of next year’s election, and chaos could jeopardize precious European recovery funds.

“This is a key and very complicated election, because the political parties are weak, they are in a completely fragmented state,” Giovanni Orsina, director of the Luiss School of Government in Rome, told AFP.

The main newspaper Corriere della Sera warned on Thursday that the vote could “hit the government like an earthquake” as Italy battles a new wave of coronavirus infections that risks disrupting the recovery from the recession induced by the 2020 lockdown.

Just over 1,000 senators, deputies and regional representatives will begin voting on Monday, and candidates must obtain either two-thirds of the vote in the first three rounds or an absolute majority thereafter.

Due to social distancing requirements, each round will take one day and, as is tradition, there are no official contestants.

Former European Central Bank President Draghi, 74, has hinted he is interested, but his elevation to Rome’s Quirinal Palace – once the residence of popes – would mean leaving his post vacant at a delicate time.

He also oversaw key reforms demanded in exchange for funds from the EU’s post-pandemic recovery program, of which Rome is the main beneficiary, to the tune of nearly 200 billion euros.

International investors fear that debt-ridden Italy could fall behind on the tight reform timetable if Draghi resigns as prime minister.

But most Italian pundits say Draghi would be better placed as president to ensure political stability and good relations with Brussels, especially if the far-right wins the next general election.

It is also far from certain that he would be able to continue pushing through reforms if he stayed put – and risks losing office anyway in next year’s vote.

“It’s a pre-election year. Even if Draghi remained prime minister, the truth is that he would have a hard time controlling the political situation and nothing would be done after the summer holidays,” Orsina said.

A deal could be struck whereby Italy’s longest-serving minister Renato Brunetta, 71, would take over as prime minister, with leaders of Italy’s main parties occupying the top cabinet posts until the election.

While Draghi remains Prime Minister, many other names are in charge of state, including European Commissioner and former Prime Minister Paolo Gentiloni, former Socialist Prime Minister Giuliano Amato and Justice Minister Marta Cartabia – who, in if successful, would be the first female president. .