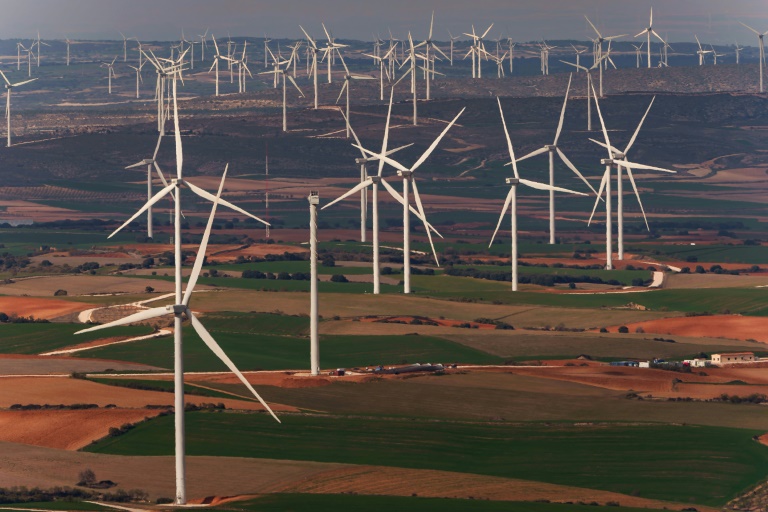 Driven by a surge in investment and new projects, wind energy has become the main source of electricity generation in Spain, just as Europe seeks to limit its energy imports from Russia.

“We are on fertile ground here,” said Joaquin Garcia Latorre, project manager at Enel Green Power Espana, pointing to the gigantic masts erected on the heights of the small northeastern village of Villar de los Navarros.

The Hispano-Italian firm chose this place well exposed to the wind to set up a 180 megawatt wind farm, one of the largest in the country.

Dubbed Tico Wind, his 43 wind turbines began producing electricity in November, Latorre said as workers around him tended to the turbines, which stand more than 100 meters (328 feet) tall.

The wind farm will be able to produce 471 gigawatt hours per year – enough to meet the demands of 148,000 households – after becoming fully operational within a month.

These types of projects have been popping up all over Spain in recent years, making it the second-largest wind power producer in Europe after Germany for installed capacity and the fifth-largest in the world.

Wind became the main source of electricity generation in Spain last year, accounting for 23%, ahead of nuclear (21%) and gas (17%), according to national grid operator REE.

The sector “benefits from a favorable situation” even if “brakes” remain on its development, such as a dependence on government auctions, said Francisco Valverde Sanchez, a specialist in renewable energies at the electricity consultant Menta Energia.

After experiencing a boom in the 2000s thanks to generous public financial aid, the sector suffered a setback when subsidies were reduced in 2013 during the Spanish economic crisis.

With vast tracts of sparsely populated land, a favorable legal framework and cutting-edge wind turbine manufacturers, Spain is one of the most “interesting” markets for wind investors, the chief executive of the AEE, Juan Virgilio Marquez.

Spain is home to several industry heavyweights such as Iberdrola and Naturgay, making it one of the leading exporters of wind power equipment. “That explains the dynamism of the sector,” Marquez said.

Investor interest has even come from outside the energy sector.

In November, Spaniard Amancio Ortega, founder of fast fashion giant Zara and one of the world’s richest men, pumped 245 million euros ($268 million) into a wind farm in the northern region -eastern Aragon.

To achieve this objective, Spain is counting on the development of offshore wind power, a sector which is still in its infancy.

But since Spain has thousands of miles of coastline, offshore wind has plenty of room to grow.

“It’s an ambitious goal,” said Valverde Sanchez, saying government bureaucracy around wind farm projects must be reduced for it to be achieved.

Nearly 600 wind projects are currently under consideration by the government, according to the AEE.

As part of its plan to respond to the economic fallout from the Russian invasion of Ukraine, Spain has pledged to speed up the approval of wind projects under 75 megawatts.

“Our country had enough natural resources to become Europe’s leading producer and exporter of renewable energy,” Prime Minister Pedro Sanchez said on Wednesday, adding that this could be key to helping the European Union reach its goal of “energy independence”.

Since Russia invaded Ukraine on February 24, Brussels has been on a mission to cut Russian gas imports from the EU by two-thirds this year and end the use of Russian gas by 2027.

The Italian adventure of students during an international internship