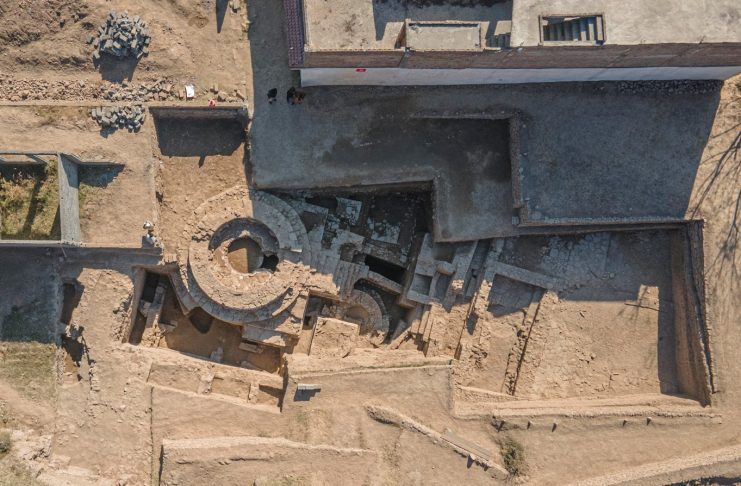 An ancient Buddhist temple dating back to the 2nd or 3rd century BCE has been discovered during an Italian-led archaeological dig in the town of Barikot in the Swat region of northern Pakistan.

The 2,000-year-old religious monument was built on an apsidal podium housing a cylindrical base that supports a stupa, or domed structure typical of Buddhist shrines. A staircase and a series of vestibule rooms that lead to a public courtyard that overlooks a road were also found.

In October 2021, as fieldwork at the Barikot plot neared completion, the team of Italian and Pakistani archaeologists overseeing the mission discovered a series of empty trenches. These trenches indicated that looters had recently attempted to loot it.

According to archaeologists who found the site, the structure could shed light on the spread of Buddhism in Gandhara, an ancient region that today spans Kabul, Peshawar, Swat and Taxila.

“The discovery of a large religious monument created during the time of the Indo-Greek kingdom testifies that it was an important and ancient center of worship and pilgrimage,” said Luca Maria Olivieri, professor at the Ca’ Foscari University of Venice, which supervised the most recent phase of the excavations. “At that time, Swat was already sacred ground for Buddhism.”

Under Olivieri’s leadership, the university partnered with the International Association for Mediterranean and Oriental Studies (ISMEO), an Italian organization that funds academic research related to the Middle East, to complete the final stage of excavations. in 2021. Initiated in 1955, the Barikot dig is the largest mission of this type in Asia.

The mission was jointly funded by the Italian Ministry of Foreign Affairs, International Cooperation and the Directorate of Archeology and Museums of KP Province and the Swat Museum. The binational initiative is supported under the Italy-Pakistan “Debt Swap” program, which funds the joint Italian-Pakistani project “Archaeology, Community, Tourism – Field School”. The agreement between the two governments supports development projects related to agriculture, education, infrastructure and rural development.