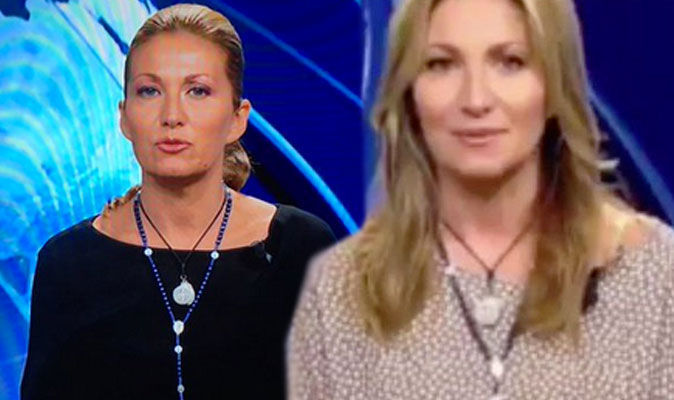 Marina Nalesso has been criticized on social media after wearing the religious symbols during a show on the Italian public channel TG1.

The journalist, who once wore the symbols of Jesus and the Virgin Mary, said in a statement that she was doing it “for the faith and to make a statement” received messages of appreciation on her personal Facebook page.

But some have taken to Twitter to criticize the presenter, saying she should keep her religious symbols for private occasions.

Ms Nalesso said she could not comment further because “RAI journalists are not allowed to give interviews without permission from the company.”

Its biggest attacker was Silvio Viale, a radical atheist and member of the Democratic Party in Turin.

He wrote on Twitter: “Even today at TG1, the arrogance of a presenter wearing a rosary around his neck.”

Another reviewer wrote: â€œReligion MUST be a private act. Leave the rosaries at home, do not take them to a public television station.

Another tweeter who criticized his actions said: â€œHow long has TG1 been with the Vatican? Rosaries and medals everywhere.

Others have come out to defend the journalist for her decision, a Twitter user writing: â€œVeil yesâ€¦ but crucifix no?

On Ms Nalesso’s Facebook page, a fan posted: “We have been marginalized for some time, not the other way around.”

Others were also angered by the complaints, citing Islamic clothing such as the burkini, which sparked controversy in Europe over the summer.

The burkini was recently banned on some French beaches, but the ban was later revoked by the country’s highest administrative court, as judges declared that such bans “seriously, and clearly illegally, violate fundamental freedoms to go. and come, freedom of belief and individual freedom “.

Despite calls from the population to ban all religious symbols worn by news broadcasters and others on television, in Italy, the RAI has never taken a decision in this direction.

This differs from Norway, where the state prohibits journalists from expressing their religious faith in any way while working.