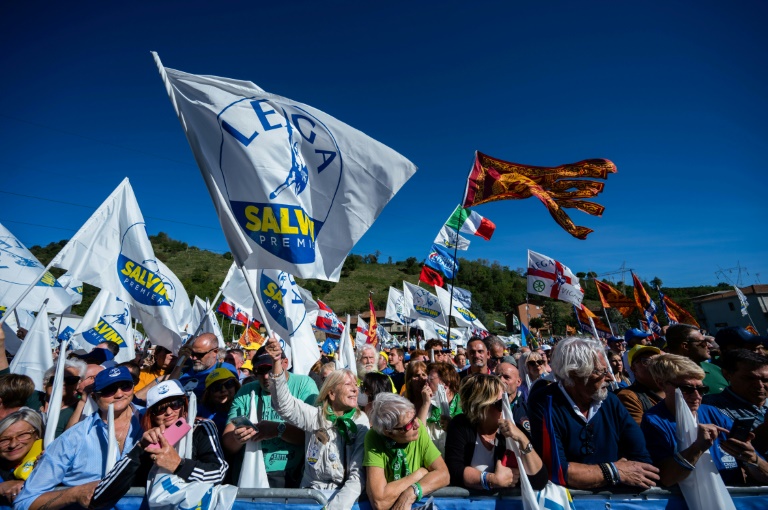 Italy’s anti-immigration leader Matteo Salvini, who trails far-right Giorgia Meloni in the polls ahead of next week’s general election, sought Sunday to galvanize his far-right, populist and eurosceptic base.

“This is Italy, full of hopes and dreams and looking to the future,” Salvini told the crowd in the northern town of Pontida, which for three decades has been the site of the annual mass rally of the ‘far right.

On Sunday, it was flooded with flags representing the Italian provinces and banners of the General Labor Union (UGL), founded in 1996 on the ashes of the neo-fascist union CISNAL.

Salvini’s League party claimed that 100,000 people came, many of whom came by bus to hear “Il Capitano”, drink beer and buy T-shirts bearing Salvini’s name and the slogan “The Italians first of all”.

The League trails Meloni’s post-fascist Brothers of Italy (FDI), polling 12% of the FDI’s 24.

Salvini hailed the result of Sweden’s general election, where voters “sent the left packing” and ushered in an alliance of the right and the far right.

He acknowledged that Americans rejected former US President Donald Trump and his “America First” cry in favor of Democrat Joe Biden. “It’s democracy,” he said.

Salvini said the League’s six main priorities were to curb soaring energy prices and develop nuclear power, give more decision-making powers to regions, carry out tax and legal reforms, to guarantee retirement after 41 years of service and to prevent immigrant boats from landing on the Italian coasts.

He also proposed scrapping the TV license fee, championed women’s right to abortion and “traditional values” around gender and family.

The League, the FDI and Forza Italia of former leader Silvio Berlusconi form a coalition considered to be the favorite for the September 25 election.

The League’s current estimated 12% vote share would represent a notable drop from its performance in 2018 and 2019, as it has participated in successive governments while the FDI has remained in opposition.

League activist Anna Valdotta, 67, told AFP that some supporters had not forgiven Salvini and left, but she remained loyal to the man she compared to “a lion walking into the arena”.

Stefano, a 27-year-old postman, praised Meloni’s leadership and said she won votes rather than Salvini lost them.

The League has toned down its secessionist aspirations for Lombardy, instead focusing on what it calls a European Union dominated by Germany and France “that declares war on Italian farmers and fishermen”.

The PD is expected to come in second place with 21% of the vote and enjoys no major support among the left and center.