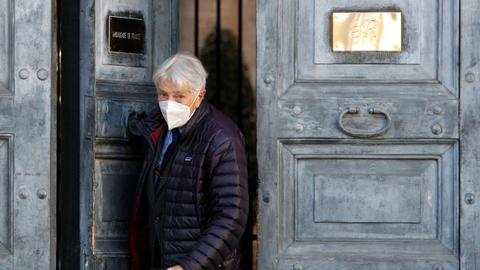 Italian journalist Corrado Augias lamented Macron’s decision to award the Legion of Honor to Egyptian President Sissi by returning the same award he himself received in 2007.

The 85-year-old journalist, well known and respected in Italy, returned the award he received in 2007 for moral reasons. He felt conflicted that Egyptian President Abdel Fattah al Sisi, who came to power in a military coup in 2013, was receiving the same award and was unwilling to stand with the military dictator as the recipient.

“In my opinion, President (Emmanuel) Macron should not have granted the Legion of Honor to a head of state who had objectively become an accomplice of atrocious criminals,” Augias wrote in a letter published by the Italian daily. The Republic.

“The assassination of Giulio Regeni represents for us Italians a bloody wound, an affront, and I would have expected from President Macron a gesture of understanding if not of fraternity, in the name of the Europe that we are trying to build together, so difficult to build” , he wrote.

Augeas’ act reflects Italy’s national anger against Egyptian intelligence services, which are suspected of involvement in the kidnapping, torture and murder of Italian doctoral student Giulio Regeni. In 2016, Regeni was found dead under mysterious circumstances in Cairo.

For Augias, Sissi is “objectively complicit, as head of state, in the criminal behavior committed by his men”. It also holds the former military general responsible for large-scale human rights abuses perpetrated by Egyptian forces since he led a bloody coup to wrest power from democratically elected President Mohamed Morsi in 2013.

While Egyptian authorities deny any involvement in Regeni’s death, observers say the signs of torture on his body were similar to those caused by Egyptian police on the bodies of several other torture victims.

With Augias, former Italian culture minister Giovanna Melandri announced that she would return the same French award she received in 2003.

“I hope that this gesture can contribute to opening a frank and friendly confrontation in our two countries on which must be based the values ​​that we want to defend, strengthen and continue to ‘honor’ in a democratic Europe and a globalized world”, a- she writes.

Regeni, 28, disappeared in February 2016 in the Egyptian capital, Cairo. His tortured body was found nine days later in a ditch near a road outside the capital. His body was so disfigured that his mother said she only recognized him by the tip of his nose.

The victim was researching Egyptian trade unions at the time of his disappearance. His case focused on the deterioration of the human rights situation under the Sisi regime.

Investigators from both countries had worked together on the murder. The Italian side made public that the witnesses had spoken to prosecutors in Rome, suggesting that Regeni was being held by Egyptian security officials.

Cairo has denied that its security services were involved in Regeni’s death. Egyptian sources claimed that his death was caused by a car accident and that a gang was then responsible for what happened next. However, these claims have never been substantiated.