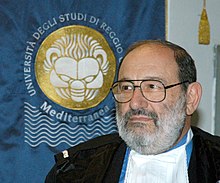 Umberto Eco, semiotician, philosopher and novelist, died last night at the age of 84 at his home in Milan, according to his family. He had cancer.

Eco was born in Alexandria, Northern Italy, January 5, 1932 and attended University of Turin, focusing on medieval philosophy and literature. In 1956-1964 he worked closely with the Italian television channel RAI. In 1975 Eco became a University of Bologna professor of semiotics.

Although an essayist, he is best known for his first novel The name of the rose, released in 1980 and later made into a movie directed by Jean-Jacques Annaud, featuring Sean connery. After a successful start he wrote other novels, the most recent, Number zero, published in 2015.

Eco’s wife and her two children survive him.