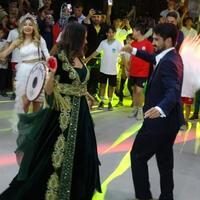 Manchester City’s Turkish-German midfielder İlkay Gündoğan, who married Moroccan-Italian model Sara Arfaoui in Copenhagen in May, held a traditional wedding ceremony in his hometown of Balıkesir province, in the northwest of the country.

The couple arrived in Dursunbey district on July 3, the day of the wedding ceremony, after a week-long holiday in the Aegean tourist destination of Bodrum.

Among the 2,000 guests at the countryside wedding were Balıkesir Governor Hasan Şıldak, Provincial Police Chief Hasan Onar and Yavuz Subaşı, a city legislator.

After the first dance, the couple then married according to Turkish law.

During the signing ceremony, the bride got bored due to the massive interest and covered her face during her bouquet toss.

The act became a hot topic on social media, with many condemning what Arfaoui did.

After a senior career at Nuremberg, his star began to shine at Borussia Dortmund in 2011.

Capped 60 times for the German national team, Gündoğan signed a four-year deal with Premier League side Man City, for an estimated £20million.

Gündoğan is known as a fan of Istanbul team Galatasaray. Local media reported that he chose Copenhagen to get married because “Galatasaray won the UEFA Cup on May 17, 2000 at Copenhagen Parken Stadium after beating British team Arsenal.”