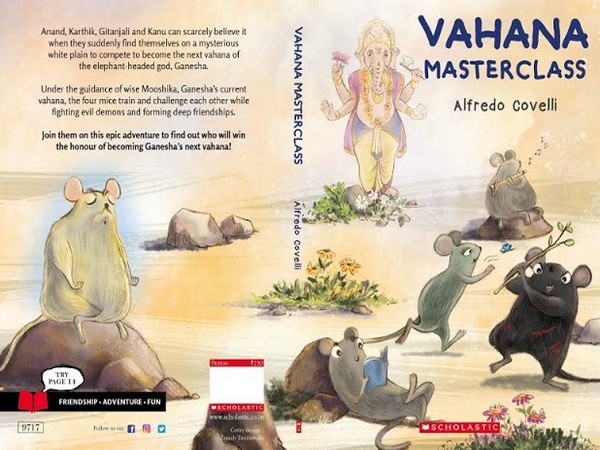 Bombay (Maharashtra) [India], Dec. 1 (ANI / NewsView): Alfredo Covelli, an author based in Italy, today launched his new book Vahana Masterclass for children and young audiences in the Indian market.
Intended for the age of readers (8 to 12 years), the books will be illustrated and published by Scholastic India. Indian mythology and culture is very popular among other countries, they admire the way we worship our god and goddesses. Our culture is simple but powerful, and people from any country feel connected to it.
The warmth and love of culture is so unique that it inspires not only our Indian authors but also authors from other countries to explore more about it. Alfredo had a keen interest in our Indian culture and mythology, which inspired him to write a story about Lord Ganesh for children.
The book tells the story of Ganesha in search of a new vahana to accompany him in all the great adventures around the cosmos. After millennia of service, the great VahanaMushika, sacred mount of Lord Ganesha is about to retire to live the rest of his life in meditation. For this reason, 4 young mice (3 months each) are selected from different regions of India: the intelligent Anand from Kolkata (selected by the goddess Kali), the devoted Kanu from Gujarat (selected by Lord Krishna), the brave Karthik from Chennai (selected by the other Vahanas), and compassionate Gitanjali from Uttarakhand (selected by Prakriti, nature).
They will be trained by Master Mushika, they will face demons and terrible dangers, and in the end, only one of them will be elected Lord Ganesha’s next Vahan.
â€œI am delighted to launch my first book in India. I have always had a deep interest in Indian culture and Hindu religion, which inspired me to write this book. Vahana Masterclass is my first book in English, the first for the Indian market, and the first for children. The book is an epic adventure of four mice and their journey to become Ganesha’s next vahana. It’s kind of Indian Harry Potter with mice and I hope it “it will attract the interest of young audiences. I suppose this book is inhabited by my love, my will and my dedication,” said Alfredo Covelli, commenting on the book.
Born in 1979, Alfredo Covelli is an Italian writer, screenwriter, film producer and teacher, and novelist working worldwide and based in Rome, Lazio, Italy. After college, he started working as an assistant director in Italian feature films and television series. In 2005, he won the main Italian scriptwriting competition (PremioSolinas) and began writing feature films and television series.
In 2012, he created his production company MEPRODUCODASOLO and began producing short and feature films, selected by the main international film festivals such as Venice, Cannes, Rome and BFI London, theatrically distributed and broadcast on television.
He has worked as a screenplay consultant in India and Scotland. He is professor of scriptwriting at the Italian National Film Institute (CSC, Centro Sperimentale di Cinematografia). He is a known producer for Pure Hearts (2017), Goodbye Darling, I’m Off to Fight (2016) and Off Road (2013).
Full of demons, darkness, courage and compassion – the book shines a light on the author’s wild and bright imagination. The illustrations are by Indian artist ZainabTambawalla. The book is now available in real bookstores and on the web through the Scholastic website, Amazon, and Flipkart.
This story is provided by NewsView. ANI will not be responsible for the content of this article in any way. (ANI / NewsView)

Disclaimer: The opinions expressed in the above article are those of the authors and do not necessarily represent or reflect the opinions of this publisher. Unless otherwise indicated, the author writes in a personal capacity. They are not intended and should not be taken to represent official ideas, attitudes or policies of any agency or institution.