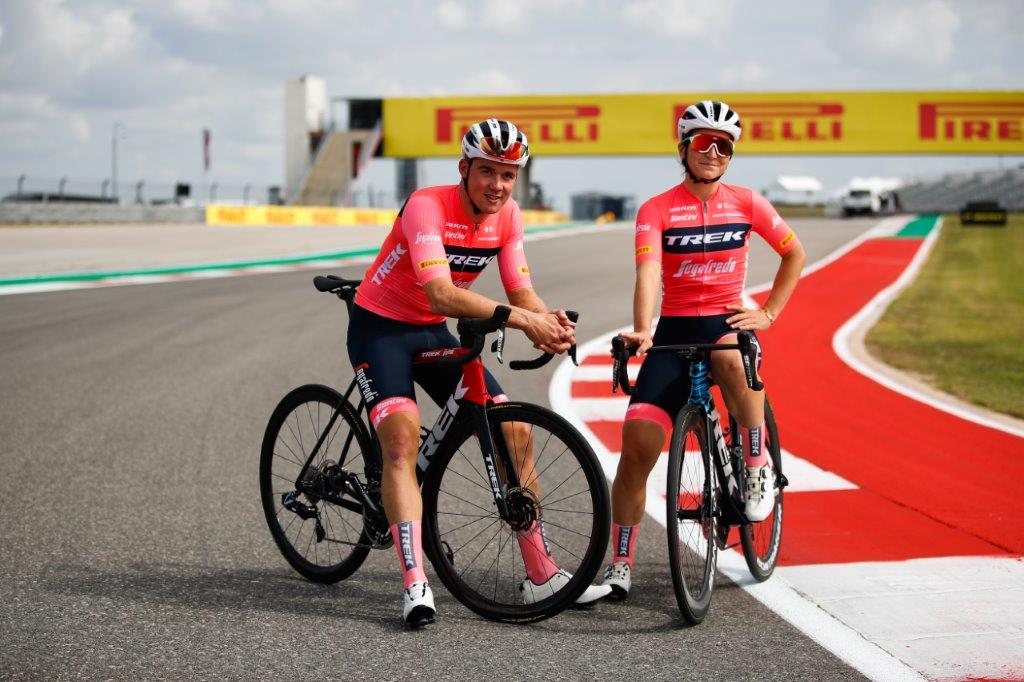 PIRELLI AND TREK-SEGAFREDO STRENGTHEN THEIR PARTNERSHIP FOR 2022

Milan, Italy, October 22, 2021 – Pirelli and the World Tour Trek-Segafredo team will further deepen their relationship with an extended partnership agreement until 2022.

The announcement comes on the eve of the 2021 Aramco Formula 1 U.S. Grand Prix, which will take place in Austin TX. October 24.

During the Grand Prix event, Trek-Segafredo champions Elisa Longo Borghini and Mads Pedersen did a lap of honor on their Trek bikes, around the famous Circuit of the Americas, highlighting the racing matrix of the partnership with Pirelli.

First inked in 2020, Trek-Segafredo’s technical collaboration with Pirelli has already produced plenty of reason to celebrate. In just two seasons running on Pirelli’s flagship P ZEROTM tire range, the team has won landmarks such as Milan – Sanremo, LiÃ¨ge – Bastogne – LiÃ¨ge Women and, still fresh in our memories, the first Paris-Roubaix Women, where the choice of tires played a crucial role.

In 2022, the World Tour team will ride Pirelli tires again and technical development will remain an essential aspect of this collaboration. The expanded partnership will also place Pirelli in a leading position on the upcoming Trek-Segafredo 2022 men and women kits.

Pirelli’s racing matrix is â€‹â€‹a constant in all its forms, whether it’s road bikes, mountain bikes, motocross or Formula 1 tires. Technological evolution explains Pirelli’s decision to be present. in competitions, which are an open-air laboratory where he develops products that become accessible to all cycling fans. In this context, the partnership with the athletes of the Trek-Segafredo team is essential, in particular because of the experience feedback it produces. For example, Pirelli’s first P ZERO RACE TLR tubeless cycling tire is the direct result of the technical partnership with the team.

In 2022, Trek-Segafredo racers will continue to provide commentary on a variety of terrain across the lineup of men’s and women’s races. The ultimate goal of this in-depth testing process is to provide consumers with the best experience with Pirelli tires on their own journeys.

Matteo Barbieri, Head of Pirelli Cycling: â€œFor Pirelli, the partnership with a leading company like Trek and with the athletes of the Trek-Segafredo team is crucial to further raise the technological level of our cycling tires. They are designed with the quality and performance required by professional cyclists and with the adaptability and versatility needed by amateurs. Today, the collaboration is still widening, confirming our mutual satisfaction with the road traveled together so far â€.

Roger Gierhart, Vice President of Trek Bicycle, said: â€œThe Pirelli brand has been making winning tires for decades. We are proud to work with a company that has played such an important role in the rich history of cycling. Pirelli has been an invaluable partner for Trek-Segafredo, especially when working with our riders and staff to create products that excel within the World Tour peloton.

Italian national champion Elisa Longo Borghini commented: â€œWe are proud to race with Pirelli and to work with their technicians. Due to the intensive and extensive use of the technology that Pirelli puts in its cycling tires, the development work with them is continuous and we are always sure that we can count on the most advanced material possible. Plus, it’s exciting to know that our cycling tires are designed, produced and tested with the same technology that Formula 1 drivers get every weekend!