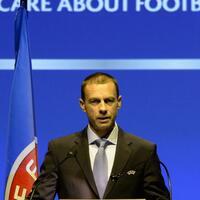 Turkey is the favorite candidate to host the Euro 2032 tournament, UEFA President Aleksander Ceferin has said of Italy’s bid.

“Turkey are big contenders for Euro 2032 and are currently the favorites against Italy,” Ceferin said in an interview with La Gazzetta dello Sport, one of Italy’s leading sports newspapers.

“I spoke about it with the president of the Italian Football Federation, Gabriele Gravina,” he added.

In the interview, Ceferin highlighted the ‘problem with stadiums in Italy’.

“At the moment there isn’t even a stadium in Italy that can host the Champions League final. It’s something incredible,” said the UEFA president. “I hope the [Italian] federation and the government would understand the importance of this [staduim issue] and take the necessary measures.

On March 23, the Turkish Football Federation (TFF) announced that the official bid file had been submitted to UEFA for Euro 2028.

While announcing the submission of the dossier, Servet Yardımcı, then vice-president of the TFF, said that Turkey was also considering hosting Euro 2032.

Turkey have a formidable opponent for Euro 2028. On January 5, the football associations of England, Northern Ireland, Scotland, Wales and the Republic of Ireland announced a joint bid “Ireland and United Kingdom” for Euro 2028. Russia also applied, but its application was suspended due to the Russian invasion of Ukraine on February 24.

Tennis fans line up all night for Wimbledon tickets