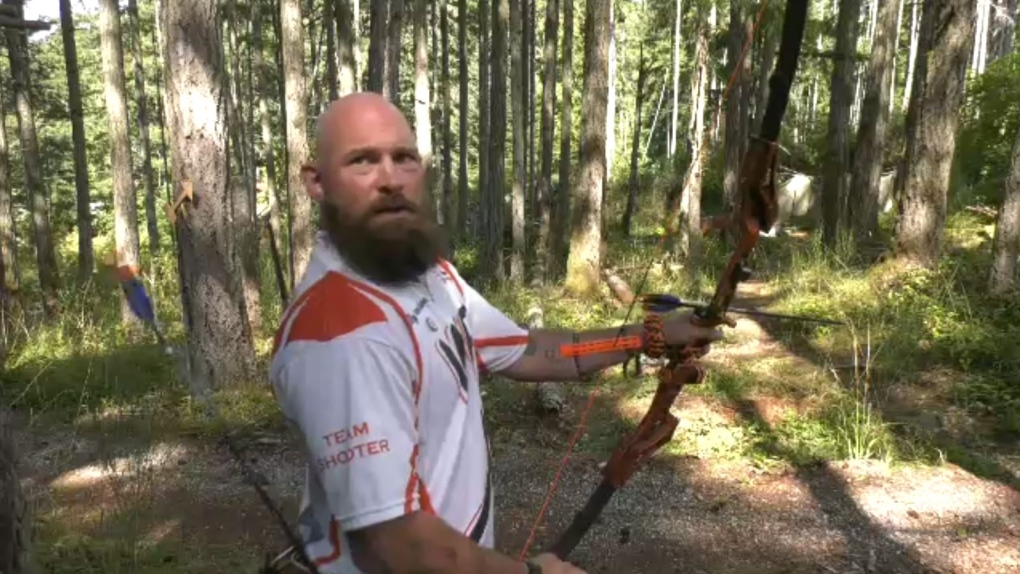 A Vancouver Island man is about to fly to Italy to compete in an international archery competition next month.

Billy Sanderson is a barebow archer, a title that refers to the type of bow he uses.

“There are no sights, no aiming devices on our bows,” he said Tuesday.

Sanderson is traveling to Terni to compete in the 3D Archery World Championships, which take place September 4-10.

Archers in this competition shoot at “life-size and realistic” 3D animal targets, he says.

A raccoon-shaped 3D target is pictured at the Victoria Fish and Game Protective Association. (CTV News)

At the Victoria Fish and Game Protective Association (VFGPA), Sanderson trains on 3D replicas of deer, badgers and raccoons.

VFGPA President Doug Bancroft said Sanderson spends dozens of hours training each week, both on and off the field.

One training method includes using tools to record every moment of every shot.

This information can then be studied to help determine things like the position of Sanderson’s body when a shot was fired and exactly when the arrow started flying, according to Bancroft.

“[Sanderson] is superb. He’s at the pinnacle of the archery discipline here at the fish and game association and he’s also a superb coach,” Bancroft said.

The VFGPA president says the association has around 5,000 members and many have competed on national teams in the past. However, Sanderson is one of the strongest competitors in recent memory.

“It’s the first time in over a decade that we’ve sent someone to a world competition at a very competitive level,” he said.

The 3D Archery World Championships have been postponed since 2020 due to the pandemic.

Sanderson says he can’t wait for his chance to compete and win gold.

“Oh, I want to win,” he said. “I’m not just going there to have fun and do something really cool.”

Sanderson says one of the key things he needs to be successful is calm.

“Working through this Zen,” he said.

Bancroft says the entire VFGPA has high hopes for the archer.

“We can’t wait to see him come home with medals,” he said.

Sanderson has also set up a fundraising online to help cover the costs of participating in the international competition.

GCSE trends: what this year’s results tell us