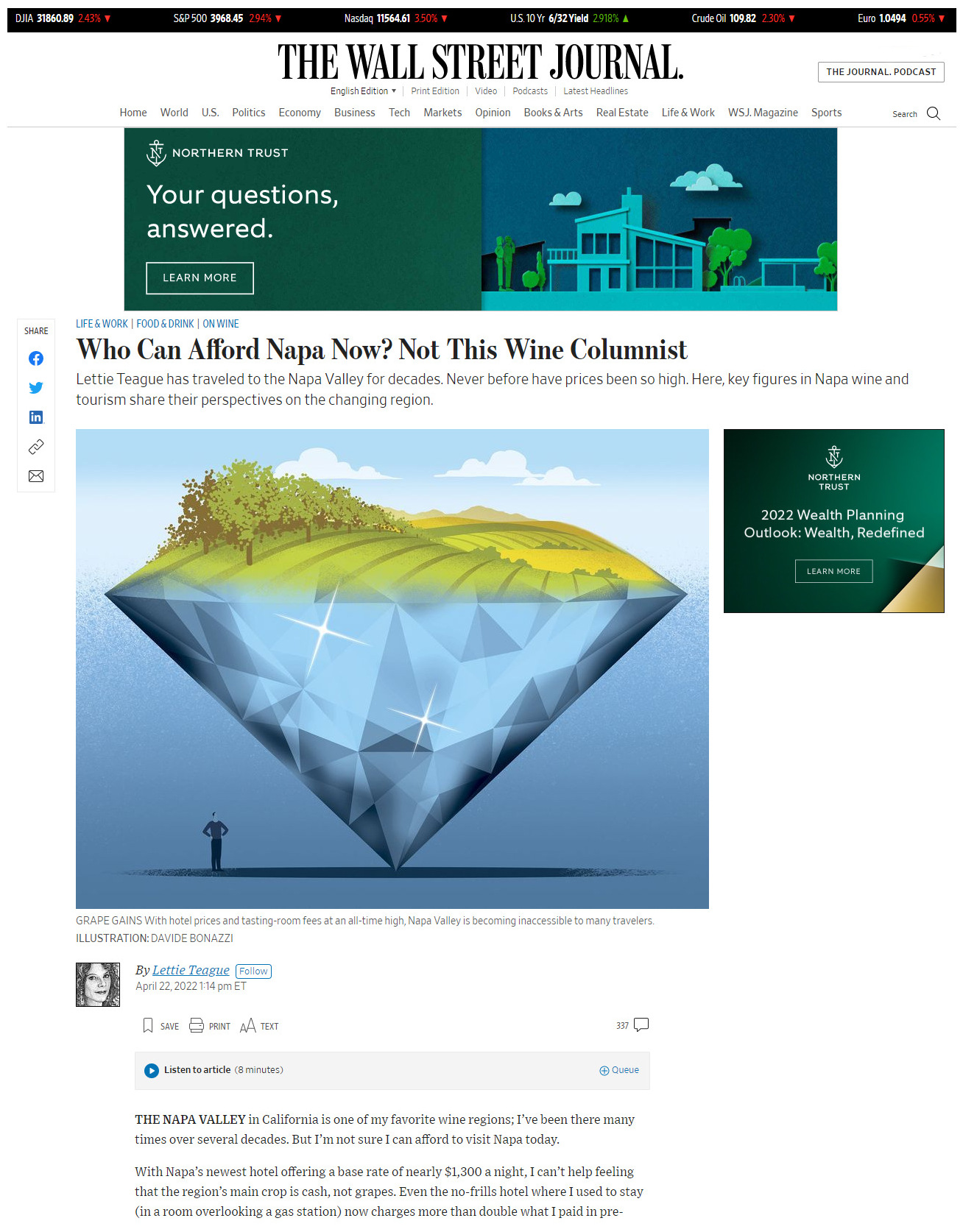 One of the industry’s most respected wine journalists, Lettie Teague of The Wall Street Journal, recently wrote about the inflated prices and extreme costs associated with a trip to Napa. Entitled “Who can afford Napa now? Not this wine columnist“It’s a great read.

She begins the article by writing about the new Auberge Resorts Collection hotel that opened in April at the southern end of the valley. It’s called Stanly Ranch, and entry-level rooms start at around $1,300 a night. Lettie goes on to say that the “no-frills” hotel she used to stay in, in a room overlooking a gas station, now charges double what it did pre-COVID. She says room prices are up 51% year-over-year from 21 to 22, according to the local tourism board, Visit Napa Valley.

His article also details the exorbitant price of wine tastings these days. Where you could taste four to five wines at a cellar, at a vineyard, for around $25-$30, you can now expect to pay between $40-$150 per person for what is considered a “basic tasting” . Want the premium juice? According to Lettie’s article, you can expect to pay anywhere from $83 per person to $1,000 depending on where you go. Yeah.

Nothing in this article written by Mrs. Teague is false. She did her research. She looked at the statistics and the facts. She interviewed the right people to get the information she was looking for.

So where does the drama come from? Well she included a part of a sentence that attracted locals (read: winemakers, cellar owners and journalists from the San Francisco Chronicle) all chirping, hot and bothered: she writes: “I can’t help but think that the main culture of the region is money, not grapes.”

Wow! Oh no, she didn’t! To say that this statement elicited a defensive and hostile reaction is an understatement.

Lander and Mobley were quick to put together a piece highlighting affordable finds in Napa, including an English muffin for $2.50 and lunch at various taco trucks around town.

For more economical tastings, they suggest skipping the wineries and vineyards and heading to downtown Napa, where one can visit a myriad of tasting rooms and have wine flights from 30 $ to $35 per person.

They admit that finding a hotel room over the weekend in Napa for less than $500 a night will be a challenge. I’m a little surprised, given the other recommendations, that the idea of ​​pitching a tent and camping at Skyline Wilderness Park wasn’t on the list; it really is a beautiful park.

Having lived in Napa and not being a millionaire, I know there are plenty of food and drink options out there that won’t break the bank. In fact, most people I know who live and work in Napa aren’t millionaires, but they still manage to live and socialize.

That said, Ms. Lander and Ms. Mobley completely missed the point of The Wall Street Journal article. Yeah, you can go pretty much anywhere on a budget (everyone remembers Rachael Ray $40 per day?) – but the question is: why would anyone want to do that?

I loved grabbing a Kickin’ Kelley sandwich for lunch at Sunshine Foods Market on St Helena and eating on the utilitarian style tables behind the store. Or belly belly at Norman Rose’s bar and have a cold Pabst Blue Ribbon in the box with disco fries. Or grab a burrata pizza from Foodshed with a bottle of something Italian from the wine table and head home for the night. But that was life in wine country … not a holiday at wine country.

Does anyone really want to plan a trip to Napa Valley to eat food from a roadside taco truck? Or taste wine in a mall on First Street? Or stay in a motel overlooking the station in the Chevron district? Or do people want to plan a trip to the famous and iconic Napa Valley to stroll through the vineyards, soak up all the romance of drinking a wine standing where it’s made, sitting in a restaurant and have a winemaker at the table next to you, to have your wines prepared and presented by a master sommelier?

Of course they do. Lettie Teague was just pointing out how this is no longer feasible for most people. The idea of ​​experiencing Napa the way people think of Napa is out of reach for most.

Obviously, there are people willing to pay $1,000 for a tasting at Heitz Cellar, and couples who can afford the $1,500 tasting at Theorem Vineyards or they wouldn’t offer it. But that certainly doesn’t seem sustainable for this wine girl.

Ms. Teague ended her column by pointing out that there are many other wine regions in California where tourists can find true accessibility. I find it ironic that this advice was given to him by a Napa winemaking legend. I don’t know why any vineyard owner would encourage wine lovers to go to Santa Barbara or Mendocino instead of Napa, but then again, maybe Lettie is right…maybe it’s a place with more money than common sense.