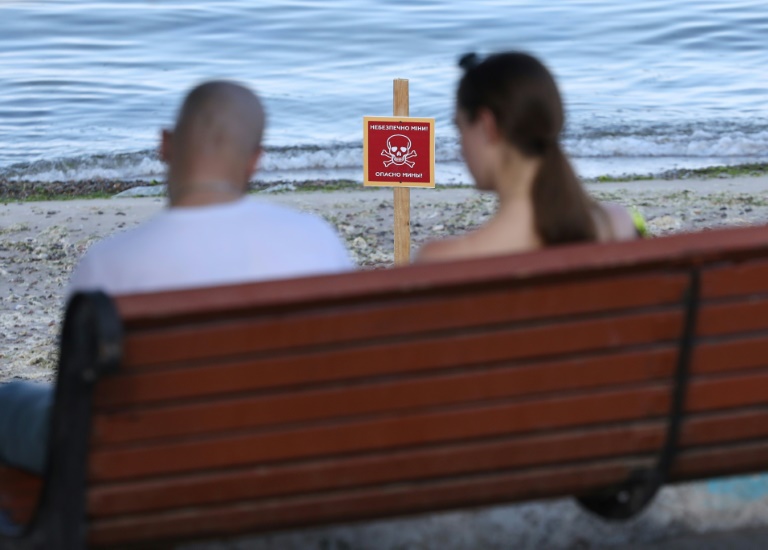 Olga Jarova points to a pleasant spot on the restaurant terrace where President Volodymyr Zelensky sat during his visits to Odessa, the Ukrainian Black Sea port currently under de facto Russian blockade.

Before the invasion, Datcha, the restaurant Jarova runs in a 19th-century stately home, reflected the atmosphere of this historic seafaring town founded by Catherine the Great: nostalgic and carefree.

Odessa has so far eluded capture, but Russia warns that any ship venturing into its surrounding waters can expect to be met by its guns.

Kyiv mined the port as a precaution after the invasion began.

The city, a multicultural crossroads of a million inhabitants, found itself isolated, forced to turn away from the sea and withdraw into itself.

“But now offshore fishing is prohibited.”

In the morning, volunteers are busy cooking to feed people in need in Ukraine free of charge. But since they can no longer source fresh fish from the Black Sea, they have to cook fish imported from Asia.

Because they only cooked locally caught fish before, they had to learn how to prepare this new “catch”, says Jarova, 47.

“With the Asian peach, we didn’t know how to season it at first,” she smiles.

An anti-aircraft siren goes off, a brutal reminder that Odessa lives a bit on borrowed time.

About 130 kilometers (80 miles) to the east, the city of Mykolaiv provides defense for southern Ukraine.

Mykolaiv has been regularly targeted by Russian forces since their invasion began on February 24, but the Ukrainians have prevented them from taking the entire coast, despite near-daily shelling.

Russian-speaking Odessa, known as the pearl of the Black Sea located near Moldova and NATO member Romania, is a key economic hub.

She knows very well that she is coveted by Russian President Vladimir Putin for both historical and strategic reasons.

Residents are proud of their renowned city, with its pleasant climate, rich cultural life and French and Italian-influenced architecture.

But its maritime activities are now prohibited.

“Every day, including weekends, I come to make camouflage nets for the army,” says Natalia Pinchenkova, 49, behind a large Union flag, in thanks to Britain for its support for Ukraine since the start of the conflict.

It is “the least we can do” in relation to the “suffering of the inhabitants of Mykolaiv”, she adds.

On every street corner, as well as in gymnasiums and theaters, volunteers were busy for the war effort in temperatures over 32 degrees Celsius (90 degrees Fahrenheit).

“People don’t want to stay home alone listening to bad news on the radio,” says Bogdan Halaida, 21, who helps organize one of the volunteer groups.

“Here, at least, they can talk to someone and not worry too much about what’s next.”

Fevzi Mamoutov, 31, of Tatar ethnicity, prepares the “plov” rice dish in a large pot with about forty volunteers in his former cultural center transformed into a military mess.

“My family had to leave Crimea” after its annexation by Russia in 2014 “so I know how Ukrainians who are currently fleeing the Russian invasion feel,” says the former wrestler dressed in an orange T-shirt.

If Odessa faces an assault “I will fight because we have good weapons this time,” says Mamoutov, referring to Joseph Stalin’s repression of the Tatars after their forced displacement in 1944.

Journalist Yuriy Basijuk has turned his television studio into a storage place.

“At the beginning, we delivered 10,000 pairs of socks to Kharkiv”, the largest city in eastern Ukraine, he says, to illustrate the diversity of wartime needs.

“We send drinking water to Mykolaiv, which is deprived of it, thanks to three daily bus trips,” adds Basijuk, who founded a popular website in southern Ukraine.

France says it is ready to help with an operation allowing safe access to Odessa.

Senegalese President and African Union head Macky Sall has urged Ukraine to clear the waters around the port of Odessa to facilitate much-needed grain exports.

But Kyiv still fears that Moscow will parachute its forces.

“We don’t want to demine everything,” said former regional vice-president Yuriy Dimchoglo, referring to negotiations on setting up demined “corridors”.

He refuses to give details on the number of mines that litter the seabed, to the great regret of the inhabitants who walk on the famous beach of Arcadia enjoying an ice cream.

Putting even a little toe on the beach is out of the question. Red skull and crossbones signs warn people not to swim in the water.

Last week, someone was not careful – and the consequences were fatal.

However, thousands of people bathe a little further along the coast where rumor has it that there is no risk.

“We are not going to let the Russians take us to sea,” insists Tatyana, who works for the local authorities and refuses to give her full name.

“Put on a swimsuit, it’s also our form of resistance!”